There are several things I would like to cover off on Interbike from last week.

The first is the big one, which involves the Metrigear Vector pedals. I want to discuss these because there seems to be a lot of half and mis-information about what they are, how they work and what they can do. After that, I’ll come back around to the rest of the trip.

So you may have read (on wattage, on velonews, on weight weenies or nycvelo) about the new Metrigear pedals. 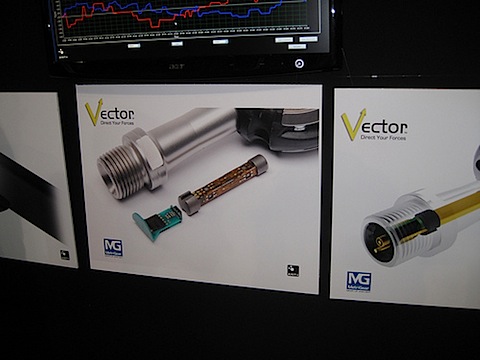 Some of what was discussed there is, well, either incorrect or at minimum imprecise.

Myself, The Privateer and Tom Anhalt spend the better part of the morning having a geek-fest with one of the lead designers/engineers of the system. Much of this writing is owed to both of them for fleshing out the details and history of these devices over Batali pizza and pasta and $8 Peronis.

In an attempt to clear up some areas but hopefully not give any information away that they were not prepared to discuss yet, here are some hard facts.

1) The pedals are stock Speedplays unmodified zeros. Metrigear will assume the warranty of the pedal. The stainless will arrive first followed by the ti (Edit: I forwarded this to the Metrigear folks and they wanted to note that the second pedal released it TBD.Â  They prefer to get the zero out into the market the right way and then evaluate the direction of the next pedal available.). The hollow speedplay axle of the new mtb pedal is the same as the road pedal and so the mtb version should could follow in short time as well. I believe the Look Keo is the next also a targeted pedal and there is the possibility for any pedal which has a hollow spindle to be adapted to the system, assuming the hollow bore accommodates the sensor(s) and electronics.

2) The system is fully wireless using a proprietary Ant+ signal to talk from one pedal to the other which then combines the two measurements into a standard Ant+ signal that any head unit will be able to use. There are no magnets to mount to trip cadence or anything outside of the pedal and the antenna/battery pods to mount to the bike.

3) Without a cadence magnet, you are probably wondering how is cadence measured? There is a 3 axis accelerometer on the board inside the pedals that determines cadence. They do promise that is will work appropriately in production (ie: better than the inferred cadence of the powertap, which granted has to try and determine it downstream of the drive train). It does seem highly plausible that this will function correctly on release.

Now, about that sensor…

While, as Velonews reported the Metrigear uses 36 strain gauges – and while technically it is, it is NOT the typical foil strain gauge that is used by SRM, Powertap (and Quarq?) that most readers would assume it has embedded in the pedal.

Instead, the Metrigear uses an piezioresistive stack for a sensor.

What is that you ask? How about a little background…

A piezoresistor is a semiconductor element made of a ceramic of silicon, germanium and/or other elements. Typically formed in a cube or cylinder shape and treated at very high temperatures until the material is VERY uniform.

Probably the largest scale application for these elements is in nanoscale. They are typically used as an actuator or oscillator to move and position or vibrate nanoscale targets. The Privateer has a lot of experience in this as his day job is as a physicist and metrologist using these types of tools to measure atoms on silicon wafers. 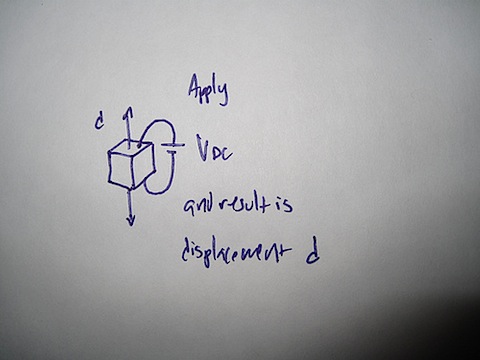 If a (in this case micro) voltage is applied to the element, then it deflects. This deflection is easily characterized and is very predictable. For a known voltage, the cube or cylinder (and the payload it will carry) moves a known amount. 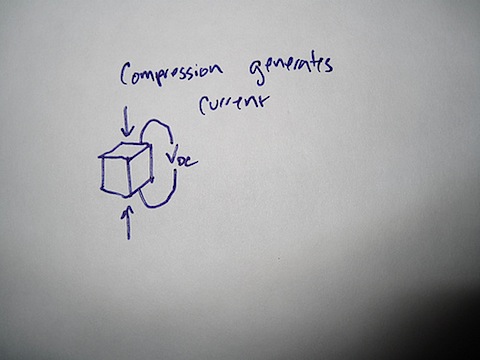 The interesting thing about the piezoresistor is that the opposite also holds true. If you compress the element, it generates voltage. And since the voltage is know, and the elements are highly characterized you know the force that was placed in the element.

Now, if these elements are mounted in a stack isolated from another and then you drill a common ground through the middle what you get is an array of sensors that can measure force through all four faces of each cube. 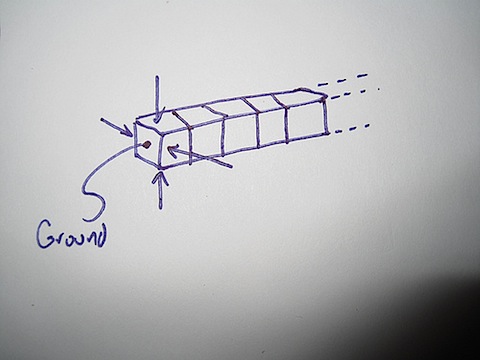 So take this stack of cubes and bond it into the hollow of the pedals so when the pedal bends (even microscopically) the cubes are compressed. Then by reading the dc current these cubes generate, you can measure the force put into the pedals.

Edit: I forgot to mention that one of the huge benefits of piezoresistors is that their gauge factor. Â  Gauge factor is the measurement of how sensitive the sensor is.Â  It should be noted that piezoresistors typically have a gauge factor several orders of magnitude greater than foil gauges. 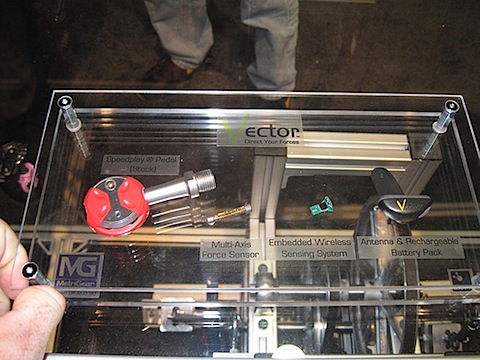 Combine force with the accelerometer data for distance and time and you have power.

We all thought of applications that data at 80Hz openly readable via an appropriate ant+ dongle could achieve… Jason went to track standing starts where the SRM does not record until the reed switch is triggered. Tom thought of being able to show optimal tire pressure on the road by watching the accelerometer stream. I, well, I had lots of ideas… I have toyed with everything under the sun and a lot of the testing I have done in the past has showed that the tools I had available at the time were outside of the precision require to show the differences.

I think that covers most of the Metrigear info. Feel free to contact me if I left something unanswered.

The rest of the show…

Now, the show was not a one sided affair. There were other excellent nuggets out there to be found.

I arrived monday night to the pleasant surprise of higher technology: 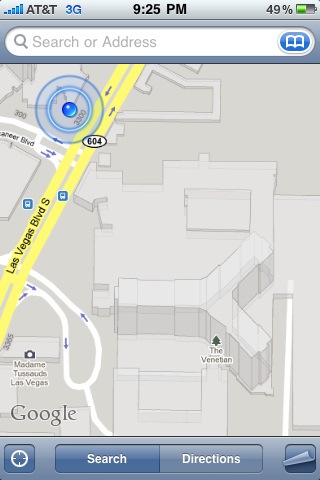 Google maps on the iphone was rocking with wireframes of the buildings! I check in to the Palazzo and the room was the best we had stayed in for the three years running we have attended Interbike. 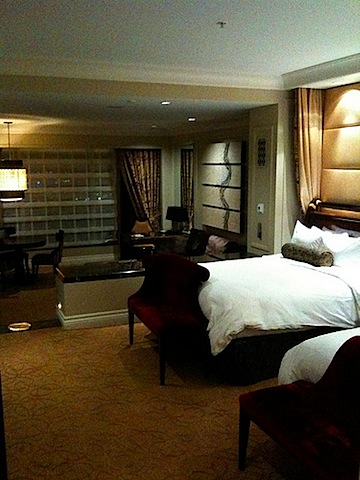 Jason and Tom arrived after midnight and we crashed in anticipation of outdoor demo.

We laized around to a slow start and got to the demo mid morning. Rode a few nice full sus mtbs (so different for me to have both gears AND rear suspension!). We pulled the plug early after Jason broke the second bike (not his fault) of the day and went back to the hotel to drink homebrew and chill before the interbike tweetup.

The tweetup was kinda cool, I won some Hammer schwag which I shared with Tom (kept the t shirts). We had to leave early to grab my cx bike from Blackbottoms (huge thanks for hauling it to Vegas!)

As we left we ran into Jim and Mieke Meyer of Quarq, Mark Rages their programmer and contributor to Golden Cheetah and the rest of his crew headed to dinner.

He gave us a nice preview of the Qollector. 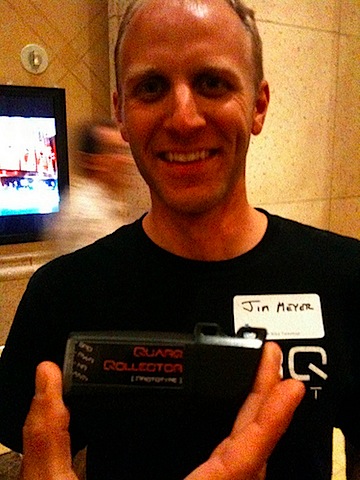 He explained it was a ant+ speed sensor as well as a headless head unit for reading in ant+ signals. We asked a bunch of questions on how it works and how it pairs and how… and how…

And the quote of the day was from Mark.. “It’s promiscous”. The ant+ data is out there floating in the air. If it is there, the Qollector grabs it.

Head back to the room and cannot connect to the $10/day internet. IT calls back and sorts it and comps us for the entire trip!

There was a power seminar (that turned out to be more a presentation of power based products) the first day bright and early. 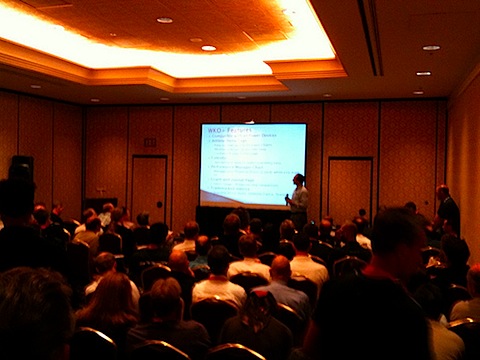 Jim showed the world the Qollector: 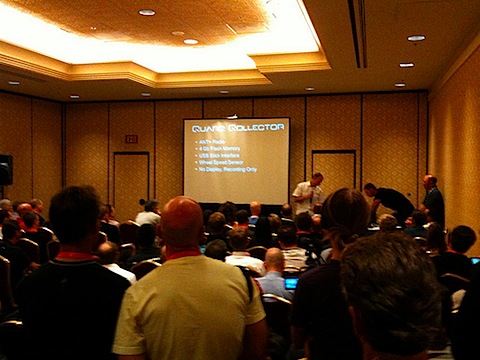 Jesse spoke of the world of Cyclops and introduced the new Joule: 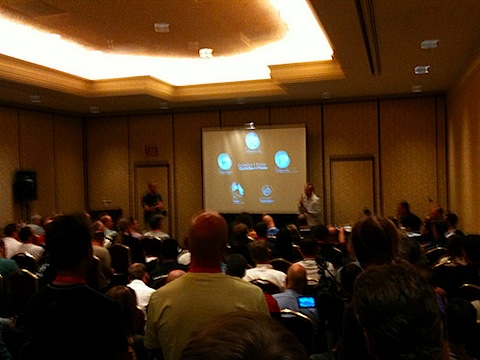 Then we hit the show floor and b-lined to Metrigear.

We made it through less than half the show.

We did hit the Specialized booth with three things in mind: Speedzone Ant+, new TT helmet and the Shiv.

The speedzone wasn’t there, but we were told that is is the same form factor as the one on display. That will make it THE ant+ head unit for racing. The topcap mount is an added bonus.

The TT helmet was AWOL. And the shiv was out of reach.

Dissapointed that the Specialized Shiv was 10 feet in the air in the Spec booth, we headed through the rest of the show. We made it as far as the SRAM booth, where lo and behold a Shiv sat at eye level. We sat and discussed it some time. When we were about to leave, Tom turned around and Mark Cote was standing there discussing it with the lead designer of the nose cone.

Mark, Tom, Jason and I sat around geeking out on TT tech for some time… by the time we said our goodbyes, it was time to go home for the night.

When we walked into the room and proceeded to start the tour de homebrew again, I got a call from a 702 number I didn’t recognize. Turns out that the twitter/radio contest that I had entered for Crossvegas I had won! So we ride the 6 miles to the venue, meet up with the Specialized Globe ride over and get on the fly Modelo handups. Check in at will call and get free passes. Got to VIP area and eat free burritos, drink free Sierra Nevada and have the entire top of the first runup to ourselves! 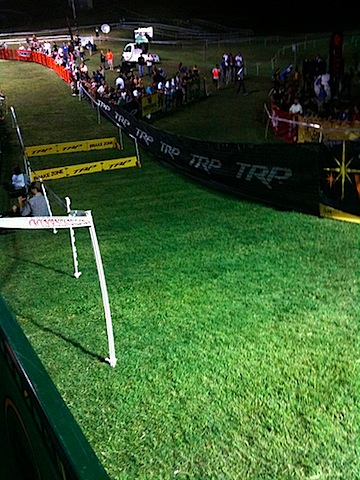 Bonus is that we have a great view, the drawback is that we can’t hand out $ bills like we have for the past 3 years…

We all scream oursleves horse for Keller (mudandcowbells!) then return to room. Crash.

We pick up on the show where we left off. Run by the Quarq booth and chat with Jim about a science/lab version to use in similar “gold standard” testing against a monarch to help seperate the myth that it is an inferior product.

Hit Saris and check out the Joule 2.0 and 3.0. Can’t wait to see someone show up for a crit with the 3.0 on the handelbars! But all in all a great little head unit.

Run pretty quick through the rest of the show.

We top off the end of interbike with a excellent french dinner and head out to US Crit Finals. Great racing buy Harward attacking and attacking and attacking the wheelers and dealers trying to make it happen. Then the guy comes in, changes jerseys and 15mins later is starting the P1 race! He tailguns the race even getting caught behind someone clipping the barrier, reels himself back to the pack then with 3 or 4 to go moves to the front and goes on the attack!

There is a group of 5-6 off the front, Harward is in the second group and trying to bridge and the pack is shelled and strung out behind the gap to them.

Coming into the last corner, the Kelly Benefits guy is pushing as hard as he can…and takes himself out! Amazing race and I think Harward cracked the top 15?

Back to the hotel, pack and set alarm for 4am to catch the 6am flight to SLC.

p.s. I did think I had found my new handlebar at the show with nice deep double cable channels in the Deda Campione… until I came home and checked the pricing!!!